Having recently flown the CTSW to France, I thought it would be a good idea to write a quick post about the trip, so if any club members wanted to do the same, the process is well documented.

In all my time growing up and working at Cloudbase, I never managed to sneak onto one of the many fly-outs to Le Touquet. 12 years later, I finally got the chance to take a good friend over the channel in Cloudbase’s Flight Design CTSW to fulfill an ambition.

A few days before the flight, I downloaded SkyDemon for my iPad and used the excellent interactive map to plot the route we would use when flying to France. This map makes you aware of all the airspace that will be affecting you during the flight, and has every air traffic control units’ frequency available at a swipe of the finger! It was a great tool to use for planning and for reference during the trip. With the paid version (£179 per year – we know it’s steep and there are some cheaper alternatives), you can file your flight plan through this software. 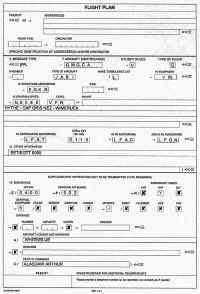 We preferred ringing up the airfield tower and filing it over the phone – it takes 2 minutes and saves all that paperwork! Plus, they’re in the loop when it comes to making first contact on start-up.

To file the flight plan on the way back when you are in France, you are advised to use the OLIVIA website. This sends the flight plan to Le Bourget where you are entered into the system. If this is not working, you can telephone Lille ATC and file it over the phone. The number is available from the Le Touquet reception desk.

Within 10 minutes of filing our plan, whilst we were donning our life-jackets, we were met by UK Border Force who checked our passports and documents. This is not normal but due to the UK security threat level having been raised to severe that week, a special operation was in force. We were also met by 2 members of Border Force on our return.

On both occasions, 5 minutes later, we were on our way.

Luckily, if you are a Cloudbase shareholder flying in our CTs, most of these things, as well as a pair of life-jackets and a portable Emergency Locator Transmitter will be provided for your trip. 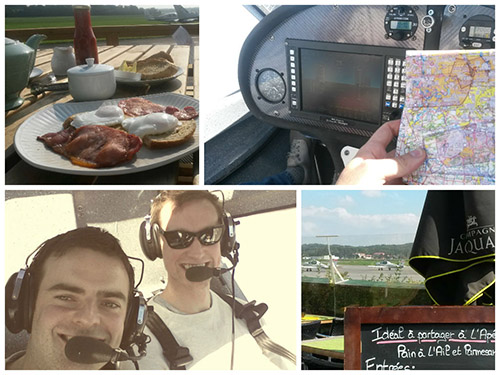 By far the most exhilerating flight I’ve ever had in a light aircraft!

Myself and Nick are both airline pilots, and it’s almost embarrassing to admit, that once you take away the IRS and GPS navigational systems we’re used to, we really had to think! Thanks to the CTSW’s glass cockpit, we did actually have a GPS position, but we preferred not to use it and test our manual nav skills. We only used the GPS to give exact locations to Air Traffic Service Units for better accuracy.

Starting off from Redhill, we took off and headed East until we were out of the local flying zone. Then we flew a straight line track down right over the top of Lydd airport, before “coasting out” across the channel to Boulogne. (Boulogne-sur-mer is the visual reporting point to enter the Le Touquet zone).

Quick flight to the beach!

We flew the exact reverse tracks for our return flight later that afternoon. The two flights took 50-55 minutes each. I was amazed at the stability and speed of the CTSW at altitude. It seems like an absolutely ideal aircraft for touring, and we both found it very spacious and comfortable.

Obviously, we were with Redhill tower until leaving the local flying zone. Subject to altering altitudes here and there, you can actually fly all the way to Le Touquet without contacting an Air Traffic Service.

However, you’re a braver person than me if you decide to cross any large area of water in a single engine aircraft without telling anyone! It is always good practise to get a basic information service from London or Lydd, for situational awareness (other planes etc.) and for peace of mind (if you had to quickly put out a Mayday!)

Do not be intimidated by speaking to London. They are there to help. Just tell them;

We actually contacted Lydd (even though we were at 3500′ and didn’t have to) who spoke to us until the mid-channel point. We then spoke directly with Le Touquet approach all the way until landing.

On the return we left Le Touquet approach and switched to London Centre mid-channel. We stayed with them all the way back to Redhill! All services were very helpful indeed and it’s an added comfort to hear conversations over the sea.

The channel crossing went smoothly. It was a very hazy day so we didn’t see land for 5 or so minutes. CAUTION! If the haze over the water results in you having no horizon, do not attempt a crossing, as disorientation will quickly ensue.

Book Up A Flight To France TODAY!

Plotting the route, filing the flight plans, and actually flying across the channel was such a rewarding exercise; something I’ve wanted to do for years. The great food and beach at Le Touquet were just an added bonus!

I cannot recommend a day-out like this highly enough so, if you haven’t got your flying licence yet, get it. I know it might feel like it is never going to happen sometimes when you’re learning; hammering the circuit and it just not ‘sticking’. We’ve all been there. However, the best thing is consistency – don’t leave it a week or two before your next flight! 2 flights a week if possible! This stops the 2 steps forward and 1 step back phenomenon.

If you already have your licence, let’s get a club fly-out booked up!

Saturday 21st June 2014 After a morning of instruction on G-CDJF, we decided to take the fleet over to Headcorn for afternoon tea. With Tom flying the new CTSW and Trevor piloting the CT2K, we took off in formation and continued eastbound to Kent. With the usual parachuting and aviation-friendly atmosphere in Headcorn, we all